I decided to watch Parts 2 and 3 back to back and post about them together… because I heard that 3 literally picks up right where 2 ends.

A bit about these two films:

Isn’t this poster awesome (image to the right)!  Thanks to Jamie Fishback, I now have a cheat sheet as to how each person in F13 dies. (Don’t worry, I’m not looking ahead) 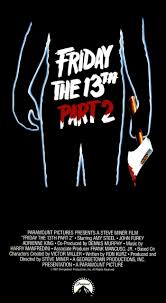 Part 2 begins about 6 months after Part 1.  Alice Hardy is in her home, still trying to recover from the horrific things that she witnessed and suffered at the hands of Mrs. Voorhees.  It’s Friday the 13th again and we realize that she’s really not alone.  Someone is there.  After numerous fake-outs, she is stabbed in the temple with a meat poker… but by who? (I knew it was Jason but I suppose others didn’t at the time? Unless the trailers gave it away…)  A difference between Part 1 and 2 is that we no longer get that POV of the killer.  This time we don’t really know where or when the killer will attack.

We then find ourselves 2 years after Part 1 when the camp next to Crystal Lake is  inhabited by counselors-in-training. They are all told the story of poor Jason and the now beheaded Mrs. Voorhees and the killings while sitting around a camp fire (of course).  They are all warned about the camp next door and told not to wander into that area. Most of them listen and instead take up drinking, playing games and having sex.  The night before the camp opens, they decide to split up and half of them go out to a casino and the other half stay behind.  One couple even ventures into the “off-limits” area of the camp but return unscathed.  Then the killing begins.  Each victim is caught alone either skinny-dipping, or having sex or going to the bathroom.  I swear, going to the bathroom might be the worst thing you could do when camping up near Crystal Lake.

The main character is Ginny Field who is sleeping with the camp supervisor.  She begins to suspect that something is up. As people go missing and show up dead, she runs into the killer, Jason Voorhees, who is back (we thought he drowned but he’s alive and living in the woods in a shack).  He’s back and angry, ready to avenge his mother’s death.  He hides his face however with a pillow case.  It makes him look like a faceless scarecrow. 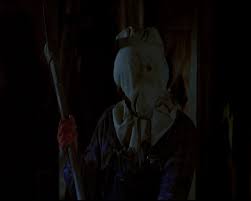 Ginny and her beau, Paul, eventually happen upon Jason’s shack in the woods and discover a shrine to his mother, complete with her disgusting decomposing head and blue cable-knit sweater (and other bodies laying about).  Ginny ingeniously decides to pose as Jason’s mother (by wearing the sweater) and it fools Jason for a little while into thinking his mother was talking to him.  I totally called it that she was going to put on the sweater though the idea of it really grossed me out.  Ginny and Paul eventually knock Jason out, cutting his shouder deep with his machete.  Ginny takes one last moment to remove the pillowcase from his head, revealing his hideously disfigured face.

When all was said and done, Jason had killed a fair share of the camp counselors.  We end the movie with Ginny being removed on a stretcher and not knowing if Paul lived or died.  Which brings us to Part 3. 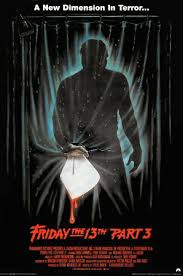 Part 3 starts off with news reports that a killer is on the lose but of course no one takes this seriously.  A group of teens jump in a van and high tail it up to the lake the very next day while Ginny is being removed from the camp in an ambulance.  These teens have tons of pot and enough sex on their brains to miss the news.  On top of it all, the main character, Chris (female), even had an incident 2 years ago with Jason!  She claims that she was found by Jason in the woods, attacked, dragged off and then woke up in her bed unharmed and her parents never mentioned it.  She hasn’t been back since.  How funny that she should choose THIS weekend of all weekends to return.  I’m confused by her story however.  My theory is that she dreamt her encounter… because why would he let her go and no one talk about it?

Anyway, as I began watching this film, I noticed shots that I would have thought would be in a 3D movie – you know, those cheesy 3D shots where something flies at the screen.  Well little did I know, it WAS a 3D movie.  Makes sense now.  Also, those amazing title graphics are just hysterical (but cutting-edge at the time, I’m sure).

Loved the 80s Biker Gang that harasses the teens but then ends up dead before they can even wreak havoc on the camp. Also, have to love the “boy that cried wolf” moment when Shelly (male) really is dying but they think he’s just playing a prank.  Thanks to his pranks, Jason ends up with his iconic hockey mask.  I had an, “Oh wow,” moment in the beginning when the Latina character is told by a shop keeper that they don’t take food stamps.  I couldn’t imagine writing a line in a movie like that now.  But maybe that’s just me.  I don’t think it’s funny.

Overall though, I would say that I found this movie, Part 3, the scariest so far.  I think it’s because Jason finally finds his hockey mask (and maybe this image is engrained in my head) and also he seemed to move faster and no matter what happened to him, he never died.  He’s invincible.  Though, at the very end, Chris hits him in the head with an axe and he’s left laying on the ground. When the police take her away (she’s acting like a crazy person but then again, who wouldn’t after all that) we pan over and see Jason laying in the barn… I know he’s not dead but how can the police miss him?

I loved that at the end of the night Chris gets into a canoe and floats into the lake, passing out just like Alice did in Part 1. She wakes in the morning and hallucinates that Jason is running toward her and then Mrs. Voorhees launches out of the lake, just like Jason did in Part 1.  It was great.  Of course she dreamt this.  Which is why I’m thinking she must have dreamt the attack from Jason 2 years prior??

I guess I’ll have to keep watching to find out.