In an earlier post I admitted to never having seen most of the early horror films that we now consider classics.  That includes the Friday the 13th franchise.  Since we’re making Love in the Time of Monsters AND I’ll be working with Kane Hodder (he plays Lou and he’s our stunt coordinator for the film) I figured there is no better time to do a little bit of horror film research.  Rob Gokee actually owns all 13 of them (at least I think there are 13 including the doc – which makes total sense).  So, I watched the first one.

The quick details for Friday the 13th

By the way, isn’t the art work for the film just awesome?  Gotta love it.

**SPOILER ALERT** (I’m just being nice.  I think 30 years is plenty of time to reveal spoilers so deal!)

My overall experience was really fun.  Of course after all these years I basically know the story of Jason Voorhees and his mother.  I didn’t really know details but I wasn’t surprised when Mrs. Voorhees announced herself.  I found the movie extremely entertaining, however, it was a lot more fun when the last girl standing was trying to escape Mrs. V.  All of the other characters who were killed earlier had no idea that someone was after them.  The creep-factor came with us knowing someone was lurking and watching them and would eventually kill them all.  But they all hung out, fooled around, ate, drank, got naked and then suddenly killed.  Not in that order but you get the point.

When the last girl standing, Alice, realized that all of her friends were dead and that there was a killer, it was a lot of fun to watch.  I enjoyed yelling and laughing at her – she was so silly in her efforts to get away.  I would have bashed Mrs. V’s head in the first chance I got… probably with that frying pan or the baseball bat.  Why barricade yourself in a cabin and stand next to a window?  Silly girl.  And let’s talk about the killer.  She was an unrelenting psycho, wasn’t she?  She got around quickly and kept coming back for more despite her age and getting hit multiple times by Alice.  Also, how did she keep that baby blue cable-knit sweater so blood-free?  I’d love to know. 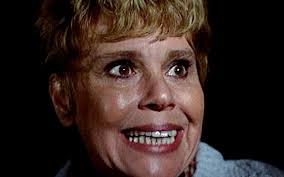 Creepiest part: when Mrs. Voorhees speaks as if she’s Jason, “Killer her, Mommy. Kill her.”

Funniest part: when Jason launches out of the lake and grabs Alice from the canoe.  (it’s not supposed to be funny mind you)

Cheesiest line: from Kevin Bacon’s character (a random camp counselor who was way more interested in hooking up with his girlfriend to really know anything about the weather). He said, ” Wind’s coming, shifted a whole 180 degrees.” before running up into a cabin to have sex.   What the hell?  Who says things like that or NOTICES things like that? Cracked me up.

Music laugh: At the end when Alice is in the canoe and the “happy” music is playing.  That music was awesomely horrible.  I was laughing so hard and it made the moment when Jason appeared even more hysterical.

Film Strategy: I really liked the POV camera angle as a device to hide the killer from us.  I loved that the hitchhiker in the beginning actually got in the car with the killer and spoke to her, looked at her, all the while we have no clue who it is… that was great.

Now to watch the rest.  Check back for more reviews of the entire franchise.  I’m serious.  I’m determined to watch them all.  Let me know what you think below!

One Reply to “My First Friday the 13th”