If you didn’t realize it, the Final Chapter wasn’t the final chapter after all (so shocked!).  The Friday the 13th franchise was reborn in 1985 with A New Beginning. 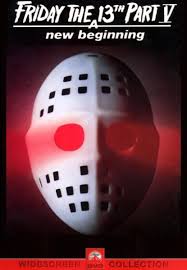 Let me say this upfront – this was my least favorite film of the five.

Jason was killed by Tommy Jarvis (Corey Feldman) in The Final Chapter.  We begin this new beginning with Corey Feldman (his hair has grown back since the last movie) and he finds the grave of Jason out in the woods when two grave robbers show up and dig him up.  When Jason is uncovered, he is obviously alive, stabs the two guys then comes after Tommy (who is hiding in the trees).  At that moment, Tommy wakes up from this nightmare (10 years later).  He’s in the back of a van clearly from a Mental Health facility.  Poor Tommy has spent his entire life in an asylum.

Tommy is to be reintegrated into normal life.  He’s dropped off at a halfway house for mentally disturbed teens.  During his first day, one of the patients pisses another off and it results in one of them killing the other with an axe.  Who gives a mentally disturbed kid an axe?  So that’s the 3rd kill in this movie but it’s not by Jason and seems oddly out of place. 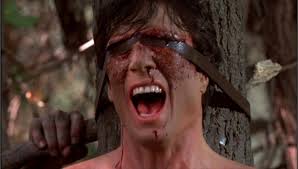 My problems with this film is that the characters aren’t like-able.  The only character I really care anything about is Reggie, a young boy who’s grandfather is the halfway house cook.  Reggie reminds us of young Tommy in the last movie.  Even old Tommy isn’t like-able because he continuously loses his cool and beats the shit out of people throughout this movie. He’s disturbed and crazy.  He doesn’t talk much and he constantly hallucinates that Jason is standing in front of him.  I found myself just waiting for him to snap.

Finally the real mass murdering begins.  Jason is somehow back, alive now (after 10 years) killing people.  He’s is killing everyone in sight:  The hicks down the road (who are way obnoxious and over the top).  The leather wearing teens who break down in the woods (who are very angry for no good reason).

There is pretty blatant nudity (of course) when two of the patients, Tina and Eddie, sneak off to have sex in the woods. Afterward Tina lays naked on the blanket while Eddie leaves to wash up in the stream.  While alone in the woods, Jason kills Tina.  When Eddie comes back, he’s killed (by leather strap… hm…).  None of the kills really left an impression except for Tina’s.  Jason uses gardening shears to gouge out her eyes.

Finally at the end when Reggie and Pam, the lady who runs the halfway house, are in the barn trying to get away from Jason (Pam grabs a chainsaw to fight him off… until it dies).  Then Tommy shows up and confronts Jason.  He’s paralyzed with fear and Jason cuts him across the chest with the machete. Luckily Tommy has a switchblade which he stabs into Jason’s groin.  After a struggle they finally defeat Jason and he falls onto a spiked piece of farm equipment which punctures his body all over.  His mask comes off and it’s revealed that it hasn’t been Jason all along.  It’s Roy, the paramedic from the beginning who’s been dressing up as Jason and killing people.  He did this because his son was the guy killed in the beginning by the other disturbed kid which made him lose his mind (an entire movie of mentally disturbed people and no real Jason – doesn’t seem like a Jason movie to me then). 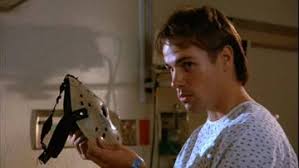 In the end Tommy is really losing it.  He’s in the hospital hallucinating again.  He gets up and pulls Jason’s hockey mask from the drawer.  He puts it on and is about to stab Pam… but the movie ends. So, Jason doesn’t actually exist in the world of A New Beginning and we’re lead to believe that Tommy will be the new Jason.