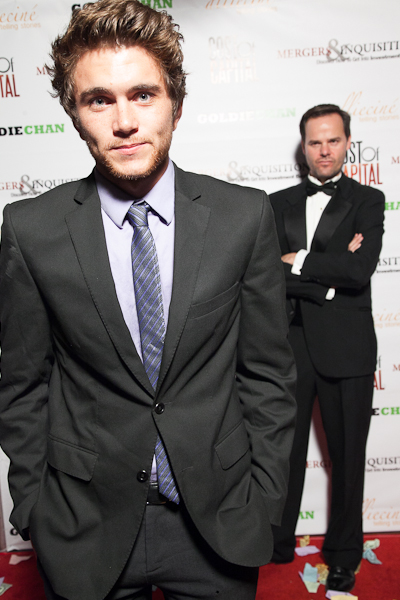 You’ve heard about Cost of Capital since December of 2011 when Goldie Chan and I begin shooting a 6-episode dramatic series about the shadowy world of investment bankers created by Brian DeChesare.  It’s been a long road of production, pick-up shoots and post production but all the hard work has paid off.  Not only do we have an amazingly talented group of people in front of and behind the camera but we can now also say we’ve got the best audience as well.

Last month we launch our Official Trailer and we have over 17K views to date.  A week ago we discovered to our astonishment that we ranked on IMDb’s Movie Meter at #4 and Popular TV at #2.   This means that we were one of the most searched shows/movies on IMDb last week.  Our rank changed from 67,000 to 2.  How does a webseries with no released episodes rank this high on a site next to Breaking Bad, Game of Thrones, and Dark Knight Rises?  Well, we’d also like to know so we can do it again and again!  The only thing we can say is that our social media efforts and creating something for a captive audience on M&I has paid off.  We’ve used Email Marketing, Facebook, Twitter, CrowdSpring, Video Content, Blogs and a Live Event to spread the word.  And it’s working.

This week we were proud to release Episode 1 “The Idea” & Episode 2 “The Fundraising” online and people are eating it up.  I’m so happy to hear people say, “professional TV quality,” “this should be on HBO,” and “it looks so good and the characters are so compelling.”  How can I not be proud?  Another amazing thing to see is that our cast and crew are also proud of their work as well.  They are promoting and talking about it as much as we are – as they should – but it doesn’t always happen.  And I say “they should” because it’s their careers they are promoting.  If you are proud of a job well-done then get the word out and promote.  We all do it.  That’s how the world will find out who you are.  Unless the eyes are on you, you may continue to struggle and doubt yourself.  Shout from the rooftops and share your links.  We’re all routing for Cost of Capital together.

We submitted Cost of Capital to the IAWTV Awards this week and may submit to others in the near future.  The release schedule for the rest of the show is listed here.

Official Website: http://www.costofcapitaltv.com/
YouTube: http://www.youtube.com/CostOfCapitalTV *subscribe to our channel and like each video
Facebook: http://www.facebook.com/CostofCapitalTV *like if you’re on Facebook
Twitter: http://www.twitter.com/CostOfCapitalTV *follow if you’re on Twitter
IMDb: http://www.imdb.com/title/tt2351072/  *10 stars is the best rating!
About the show:
How far would you go for the biggest deal of your career?  “Wall Street meets The Social Network.” It’s a rare behind-the-scenes look into the shadowy world of billionaire investors — where egos and intrigue collide and a single deal worth hundreds of millions of dollars must get done at any cost. This 6-episode web series was created by Brian DeChesare. Brian is the Founder of Mergers & Inquisitions, the biggest investment banking blog in the world, with nearly half a million monthly visitors and tens of thousands of subscribers.